Where Glasgow Used to Shop and Dine: Walk 2 Candleriggs to Jamaica Street 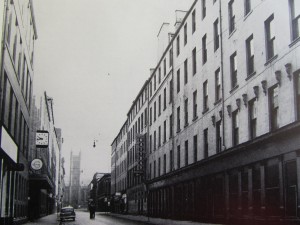 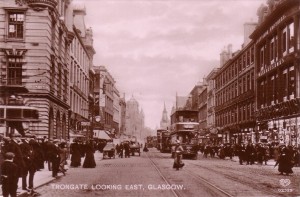 Looking north, up Candleriggs, from the Trongate.   Looking east, along the Trongate, from Argyle Street.

Originally initiated and produced for Glasgow’s Doors Open Days’ Festival, this walk has been expanded to cover recent developments and changes to the area covered. It passes the sites of many of Glasgow’s famous stores and restaurants, and is an ‘architectural’ retail and dining trail from the Candleriggs to Jamaica Street.

Like many Glaswegians, I can remember the days before the area around the Trongate, the High Street and to the south of George Square, was named the ‘Merchant City’. The gradual decline, which could be seen in the exterior deterioration of many of the buildings, was arrested when it was realised that some of the larger warehouses could be converted into residences. This ‘gentrification’ of an increasingly run down, but historically important part of Glasgow, saved many frontages, if not the interiors.

The Merchant City had numerous warehouses, including Goldbergs, where the walk begins. Others were located on Ingram, Glassford and Miller Streets. On Argyle Street, was the famous Anderson’s Polytechnic department store. Gardners, Paisleys, and the Colosseum were on Jamaica Street.

This is one of two walks which looks at the buildings and locations which housed a wide range of warehouses, such as Bremners, Rattrays, and Telfers, as well as the well-known department, clothing and furniture stores which dominated the streets for decades.

Some of the buildings which housed these retail giants have survived. while others are known only from photographic records.

The area covered by the walk also contained a wide range of tea-rooms and restaurants which catered for all tastes and purses. Some of the larger stores offered such services too. Illustrations of ephemera relating to these once household names, will be available for viewing during the walk. 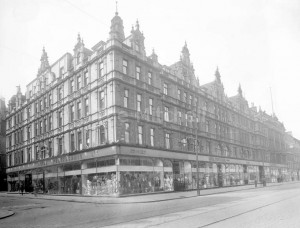 Below, a bustling Jamaica Street, looking north towards Union Street. 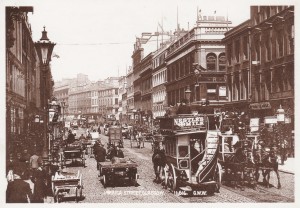 This walk will be available from April 2020.